"Leaving his briefcase by the door, he asked me to join him in the living room. I wasn't sure what was up, but one glance at the stone-cold look on his face told me that something was wrong -- terribly wrong.

Sitting across from him, I'll never forget the sound of his voice as it rang in my ears and ripped through my heart.

"Are you having an affair?" he asked.

Looking up at him, I quickly answered, "No. Why would you even ask that?"

Please don't lie to me," he said. As he continued to question me, the heat rose in my face. My cheeks were numb; my mouth was dry; my body was weak. "Did you have an affair?"

I hung my head, unable to look in his eyes. Sitting alone on the couch, I felt the fear of truth spin around me like the web of a spider until I was helpless to move. Barely able to speak, I lifted my chin in a nod and then in another. My house of cards collapsed, my shame crashing to the ground along with it." 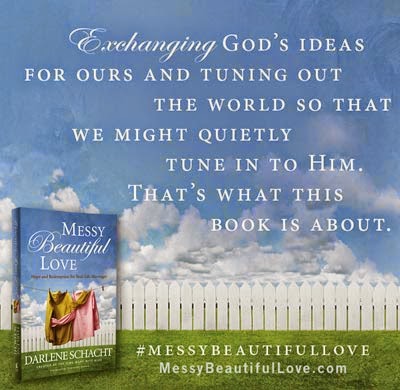 I grew up believing in true love and fairy-tale romance. I believed that Prince Charming really did exist, that, someday, he would come for me, and, when he did, that we would, undoubtedly, live happily ever after in a fairy-tale marriage. It didn't take long for me to figure out that that is not how it works at all in the real world.

True love does exist and it can be absolutely beautiful! But, sometimes, love can be messy. Three marriages and two divorces later, I can honestly say that love in my own life has been very messy indeed!

I first 'met' Darlene Schacht (a.k.a. the Time-Warp Wife), back in January of 2011 when I happened to stumble across one of her articles online. (I know this because I still have the article in my archives.) The openness and honesty with which Darlene shared her testimony immediately captured my attention and won my respect.

While, as of yet, I have not read the book in its entirety (I am working on it and a review is forth coming), I have read enough to know that Darlene's latest book Messy Beautiful Love - Hope and Redemption for Real-Life Marriages will be the pinnacle of all that she has written thus far.

In Messy Beautiful Love Darlene shares her testimony, talks about her own infidelity, and tells how she and her husband, Michael, chose to work together to overcome the weaknesses in their marriage, allowing God to, fully and completely, restore it and them.

Messy Beautiful Love carries a message of hope to all of us, as it encourages us to clean up our own messes God's way and challenges us to surrender our marriage relationship to God as an act of obedience.

Messy Beautiful Love isn't being released until September 16th, but GOOD NEWS! By pre-ordering now, Thomas Nelson Publishers will send you over $50.00 worth extra goodies for free!

Once you've placed your order, e-mail MessyBeautifulLove@gmail.com and give them your order confirmation number, along with the number of books you purchased. The extra freebies which will be e-mailed to you soon thereafter.

All My Love,
~Rebecca
Posted by Rebecca Knox at 8:42 PM No comments: