One of my readers just asked me how I was doing after John's passing. I told her that I'm doing okay. I'm trying desperately to find my footing after his death, but I can't seem to get past one blow before another strikes.
We had John's Celebration of Life on Saturday; yesterday one of my oldest and dearest friends in the whole wide world passed away. I won't write much about her here, because I just wrote a whole post on our half-century-long friendship exactly one year ago tomorrow. You can read that post by clicking HERE. I will fill in the gaps though. 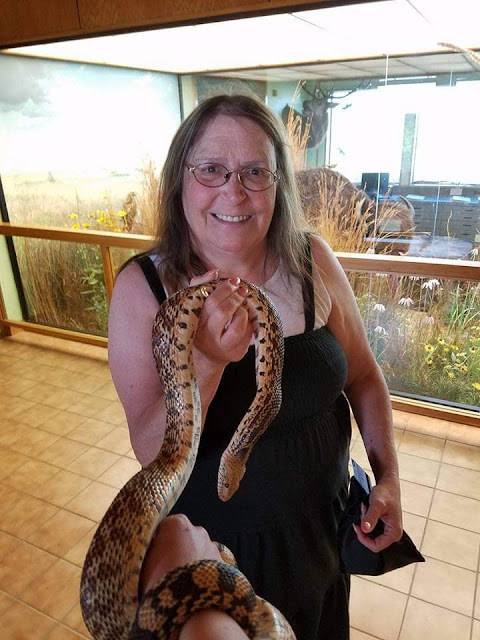 Picture of Dorothy Touching the Snake at Prairie State Park
(where I work) on One of Her Many Summer Visits
Dorothy had a really rough time after her son was murdered a little over a year ago. She came up and stayed a few days with us last July and, as far as I can remember, that was the last time I saw her.
When John was sick back in April and was being transferred from Joplin to Springfield, we had a tentative plan that, if I could not acquire a hospitality room in the hospital, I would stay with Dorothy (she only lived a few blocks from where we were going to be). I was able to acquire to the hospitality room, so we decided Dorothy and I would just get together for lunch or something while we were in town (she could not visit us in the hospital due to COVID restrictions).
After being in hospital at Springfield a couple of days I told Dorothy that if she wanted to come pick me up we could go grab a bite to eat and visit for a short time. She wanted to but said she really wasn't feeling well. I told her to go get tested. She and her youngest son both tested positive with COVID-19.
Long story short...
Dorothy ended up being hospitalized with COVID, got out, went home on oxygen, got worse, ended up back in the hospital, was put on a vent and given a 20% chance of coming off. She came off, but has struggled ever since.
She was unable to eat, had to have feeding tube put in, and could no longer walk. She was briefly put in a rehab center, but within just a few days was sent back to the hospital.
On Wednesday her daughter contacted me to let me know that Dorothy was finally being released and was scheduled to come home TODAY (Friday, July 30th); yesterday morning she contacted me to tell me that she had just gotten word that her mother had passed away of a major cardiac event (I guess that's just a fancy way of saying that she had a heart attack). Unbelievable!
And, so...that's how the story ends. Another loss. I don't understand, but I don't question it, either. I'm not angry. I just don't get it. This makes five deaths since early March, four of which were people extremely close to me; the other considered a very good friend.
Prayers over Dorothy's family would be much appreciated...her daughter, Amanda, her son, James, her ex-husband, Roy, and their three grandsons, DJ, JJ, and Josh. Thank you!
Until next time...
~Rebecca
Recent and related posts that you might enjoy reading...

Five on Friday - Dorothy and I

Email ThisBlogThis!Share to TwitterShare to FacebookShare to Pinterest
Labels: friendship