Fresh Garlic For The Ear 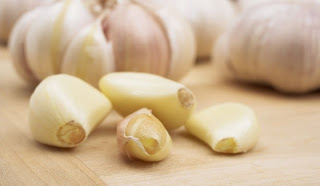 I had been battling a painful, swollen, stuffy ear for several days and it wasn't getting any better. In fact, it was getting worse. It felt like I had a super ball stuck in my ear and I could barely hear out of it. I was living on pain relievers and Benadryl until I thought, "You know what? I'm just gonna try garlic!" I had heard of it from multiple sources before, but would never have believed it unless I tried it myself...which I did...and it does! A clove of garlic in the ear really works to draw infection and the pain is gone! And relief came in an amazingly short time!
What I did was remove a clove of garlic from the head, peel it, snip the pointy end off making it flat, and cut a few small slits in the end of it to release the oils. Then I stuck the whole clove down into the ear canal and immediately the oils began to sooth the pain. Within a short time afterwards the hard ball of infection behind my ear began to grow smaller and the pain was gone. I still have a very small knot behind my ear, but the pain and swelling have not returned. I am doing a second clove in the ear canal now and expect that it will finish the job that the first one started. I am totally and completely amazed!
Posted by Rebecca Knox at 12:30 PM