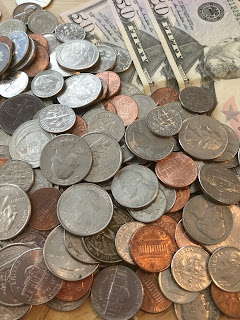 Hello! And welcome to this week's "thrifty week" post! 🙋

What gorgeous weather we're having this weekend! The high was...like...80 degrees yesterday and the overnight low last night was right at 60! It's feels like a prelude to fall and I'm loving it! 🍁🍂🍁 We are supposed to get a deluge of rain later today and into tomorrow though, but, hey! I'm okay with that, too, as long as the temps stay where they're at! ⛈

Okay...so on to this week's "thrifty" happenings!

- This week we were blessed with cucumbers, tomatoes, zucchini, and yellow squash fresh from a friend's garden. The cucumbers were the best cucumbers that I have ever tasted. I peeled every one of them, cut them into cucumber spears, and ate them just like that. Normally, I'm not that cucumber crazy, but these were exceptional!!!

- Later in the week I purchased zucchini and yellow squash from a friend who grows vegetables and sells them at a farmer's market. Bigger squash were 2 for $1; medium-sized ones were 4/$1. My friend threw in quite a few smaller ones that she said were too small to sell for free. I spent $10 and came out with a boatload of squash! I share several, turned most of the zucchini into noodles to freeze for the winter (I will be doing a post on that later), and the yellow squash I saved to saute in butter until golden brown and eat fresh. (I love to serve this for breakfast with eggs, or as a side with lunch or supper...especially with salmon fillets! Yum!) 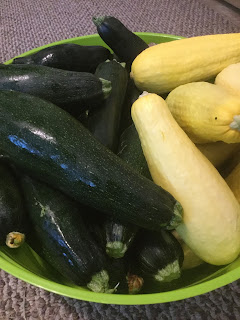 - My husband and I finally used those two coupons (given to me by a visitor at work) for the free ice cream cones at Dairy Queen. The cost without the coupons would have been $5.15...but, of course...we wouldn't have stopped at Dairy Queen for ice cream cones, in the first place, if it hadn't been for the coupons, so, needless to say, it was a real treat! 🍦

- I received 250 bonus points on my KickBack card as a birthday gift this week (my birthday isn't until later in the month, but they sent the points this week). That was totally unexpected and I'm thankful! A few more points and I will have enough to get a free tank of gas!

- I also received 40 extra birthday minutes from Tracfone when I added 120 minutes minutes to my airtime card, which was great, because it was time to add minutes anyway. 📞

- AND I received a $5.00 off birthday e-mail from McAllister's on my next visit. The offer expires August 31st, but I'm sure I will use it when I take my friend to chemo on the 15th. She and I both love going to McAllister's! The food is delicious and the girls that work there are so good to us! 💓

Well, that's it for the "thrifty" happenings here this week! Remember..."A penny saved is a penny earned!" Little things done consistently add up to big savings over time!