This week's prompt for Five Minute Friday is 'first' and this first week of 2016 has been quite eventful to say the least!

A week ago today (Friday, January 1st) started off with our annual 'First Day Hike' at Prairie State Park. 53 people came out to go on the 2-mile, naturalist-led hike in hopes of viewing the bison a little more up-close and personal than they normally would be fortunate enough to do. I don't think they were disappointed.
I worked the 2nd of January (Saturday) and did my dad's, and a friend's, grocery shopping after church on Sunday the 3rd. When I got home from shopping I discovered that my dad wasn't doing so well. He hadn't been well for weeks, but was obviously worse than he had been. By Monday morning (the 4th of January) he decided that it was time to do something different, so we headed to the ER in Joplin. He was diagnosed with pneumonia and promtly admitted to the hospital.
On the following morning (Tuesday, January 5th), our daughter in Kansas City called to tell us that our son-in-law, her husband, Phillip, had suffered a couple of really bad seizures back to back and she was headed home to take him to the ER in North KC.
A few hours later, while we were on the way to see my dad in Joplin, Amanda called to tell us that Phillip had a brain tumor. Wow!
After breaking the news to my dad in Joplin, John and I headed to North Kansas City on the morning of the 6th (Wednesday) to be with our daughter and son-in-law for a few hours. While we were there, it was decided that Phillip would have surgery to remove the tumor the next day.

We came home Wednesday night. Went to Joplin early yesterday morning to see my dad, then turned right around and headed back to North KC, arriving mid-afternoon shortly after Phillip had been taken into surgery.

The surgery took about 4 hours and and everything went beautifully! The Lord's presence was over all and Phillip did great! He's got a long road of recovery ahead, but praise God! We are believing for a full and complete recovery and in record time!

We spend the night at the hospital with Amanda last night, then got the call this morning that Dad was being released from the hospital in Jopin this afternoon...so...after breakfast in North KC, it was back to Joplin to get my dad out of the hospital and get him home where he is so happy to be.

I don't know what tomorrow holds, but I do know Who holds it and that, whatever happens, He is already there. I do hope, though, that the rest of 2016 is a little calmer than this first week of the new year has turned out to be for our family. 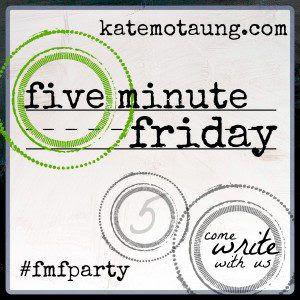 Five Minute Friday - a free write, which means, as our hostess, Kate Motaung, says, "...no editing, no over-thinking, no worrying about perfect grammar or punctuation. Just write."
Posted by Rebecca Knox at 8:07 PM