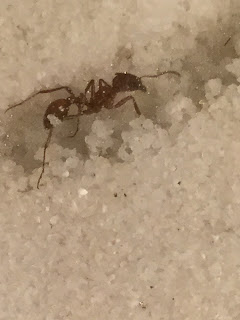 "Go to the ant, thou sluggard; consider her ways,and be wise: Which having no guide, overseer, or ruler, Provideth her meat in the summer, and gatherereth her food in the harvest"
(Proverbs 6:6-8).

Ever since I was a child I have wanted an ant farm. In preparation for a preschool program at work I ordered one.

The ant farm arrived several weeks before the program was to be given; the ants did not. In fact, they weren't even shipped until about three weeks after the program was over. Then, they were delayed even further.

I got an email from the company that I had ordered the ants from saying that the ants had been shipped on Monday, the 19th of June. When they hadn't arrived by Friday the 23rd, I was becoming quite concerned.

Using the tracking number that had been given to me through the email, I discovered that the ants had been delayed in shipping and were, at that moment, sitting in a post office in Kansas City, Kansas. I was really upset. How long could the ants live without food and water?

The ants finally arrived in our mailbox on Monday, the 26th of June...a full week after being shipped!

I quickly opened the package and removed the vile of ants that it contained. From all appearances the ants were dead. I went ahead and quickly emptied the vile of ants into the ant farm. There was a huge, icky mass of decaying ants. I felt so bad for them. Small as they might be, they are still part of God's creation.

Okay...so after watching anxiously for a few moments, I observed that there was some movement among the mass of deceased ants. I went ahead and fed and watered per instructions and put the farm in a dark room to see what would happen.

The first time I looked I didn't see but two ants moving around; by the end of the first day there were five, but only two looked healthy and somewhat energetic. By morning I could clearly see seven ants working through the mass of decaying bodies that littered their new home. I wished I could help them, but I didn't know how I could without destroying the ones that were left alive. I decided to keep watching.

By the end of the second day, I could clearly see twelve living ants; the vial was supposed to have contained 30 ants when shipped, so less than half of the ants had survived.

The ants that were able, had maneuvered around the carnage and were making a place at one end of the farm to dispose of their dead. It was amazing! They had dropped the dead ants down into a shaft that had been made at the far end. Not all of the bodies had been moved, but the majority of them had. The ants were still working steadily. At one point I saw two ants lifting one dead ant and, working together, they moved it to the far end to dispose of it.

After the ants moved all the dead ants to one end of the farm, they proceeded to move them all up and out of the bottom part of the farm, and into the top chamber where they completely buried them in sand.

Even though the ants seemed to be doing fairly well at that point, apparently they weren't. Within a few days half of the surviving ants had died. There are currently six living ants in the farm.

After considering the ants, here are some of the things that I have learned from them:

#1 - Ants are amazingly resilient! To go through the U.S. Postal Service...trapped in a tiny vial...in transit for a full week...no food...and no water??? The fact that any of the ants survived is incredible!

#2 - Ants are clean. The first thing they did after regaining some strength was set to work cleaning and organizing their new home.

#3 - Ants are not easily detoured. It didn't matter that they had been booted out of one home, shipped halfway across the country, delayed en route, held over a couple of extra days in a Kansas City, Kansas post office, were desperately thirsty and hungry, witnessed the deaths of the majority of their traveling companions, and were dumped out into a place they had never been before. They simply set to work and did what they had to do to make things work with what they had where they were.

(There's definitely a lesson in that alone that might be worth considering!!! Perhaps more than one! Bloom where you are planted? "In whatsoever state you find yourself be therewith content" Philippians 4:11?)

(There's another lesson...working together to achieve a common goal. I should have listed that one separately.)

#5 - Ants aren't procrastinators. And these ants have greatly inspired me! I have a really big task that I have put off for far too long. If these ants could get at it and do all that they did in such a short time, then, what the heck is my problem??? It's time to get at it!!!

#6 - Life is short.  I'm sure that the majority of these ants would have lived much longer had they been delivered within a reasonable time after being mailed, but even, at that, according to the information that came with them, I could only expect the ants to live three to four months, at best.

I tell you...I so admire these ants and I truly appreciate the fine qualities that they exhibit...strength, ingenuity, a good work ethic, fortitude and ability in the face of an impossible situation. I'm telling you...these ants are rock stars!!!

Well...that's my experience with the ant farm thus far. If anything extraordinary happens from this point on, I will be sure to update you. In the meantime, I will never again see an ant and not consider this experience and all the lessons learned from it.