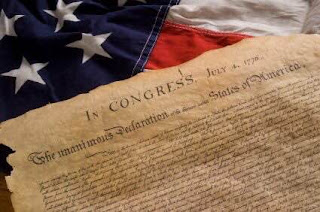 "On July 2, 1776, after months of deliberation and while directing battle in the colonies and Canada, the Second Continental Congress voted to declare the “united States of America” separate and independent from Britain. On July 4, the Congress approved the final wording of the Declaration, written primarily by Thomas Jefferson. Copies were immediately printed and distributed throughout the colonies and the continental troops. On July 9, with the approval of the last colony, New York, the Declaration became the “unanimous Declaration of the thirteen united States of America.” On August 2, 1776, the printed Declaration was signed by most of the congressional delegates, the final signature affixed in 1781 by the New Hampshire delegate."
(View Source)

When our children were small part of our annual Independence Day celebration included a reading of the Declaration of Independence in its entirety. May we, as Americans, never forget the story of and the reasons behind it. May we forever hold the freedoms that we enjoy dear and may we never forget those that bled and died to give them to us.

Email ThisBlogThis!Share to TwitterShare to FacebookShare to Pinterest
Labels: 4th of July, holidays