And HAPPY INDEPENDENCE DAY to YOU AND YOURS! 🎆🎉🎇 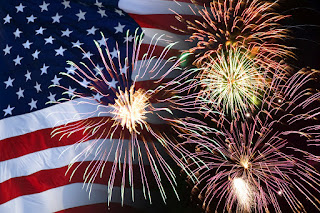 How do you and your family celebrate the 4th of July at your house?

Here are some of the things that our family has done to celebrate it at ours...

* Have a backyard barbecue and invite the neighbors or extended family over to join the fun!

* Have a blast at your picnic by putting out table crackers, which look like giant firecrackers, but are actually cardboard tubes filled with treats. Save toilet paper rolls, and cover the tubes with red, white, and blue tissue paper. Before sealing ends, fill with such things as printed out patriotic sayings, small red, white, and blue toys, foil-wrapped candies, or other treats (use your imagination). Seal ends, adding a piece of gold starred and glittered wire garland on top for fuse. 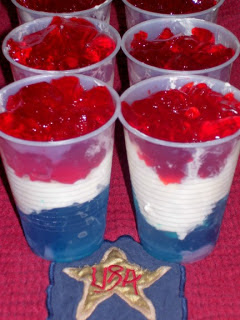 * Put a patriotic spin on party games. For example, pin the name of an American icon on the back of each guest's shirt. Choose important people, places, symbols…even quotes found throughout our country's early history. For example…Benjamin Franklin, Thomas Jefferson, John Adams, Francis Scott Key, Paul Revere, Patrick Henry, Philadelphia,Boston, the Old North Church, Constitution Hall, American eagle, Liberty Bell, Statue of Liberty, "One if by land and two if by sea!", "Give me liberty or give me death!", "Early to bed, early to rise, makes a man healthy, wealthy and wise.", etc. Each guest goes around and asks questions of the others, obtaining clues until they guess correctly who, or what, they are. Get creative with your selections and have fun!

* Watch The Patriot with Mel Gibson and Heath Ledger.

* Give small children large pieces of bubble wrap to stomp on. When they stomp it sounds like firecrackers going off. The kids love it and…just think…no mess, no smell, and no danger!

* Read the Declaration of Independence aloud as a family. Talk about what it really means and discuss the men that signed it.

* Plant red, white, and blue flowers in your flowerbeds and window-boxes. Things like petunias, inpatients, salvia, alyssium, and geranium work well. If you have enough space, and the ambition, plant them to resemble a flag!

* Attend parades and local firework displays in your area.

* Put on your own firework display.

* Have a red, white, and blue water balloon fight.

Beat cream cheese and sugar in large bowl with mixer until well blended. Whisk in Cool Whip. Spoon into crust. Refrigerate 3 hours or until set. Arrange berries in rows to resemble flag.

That's some of the things that we've done in the past to celebrate the 4th of July at our house. Now feel free to share some of yours!

Recent and related posts that you might enjoy reading...