Toss-Up Tuesday - I Don't Get It 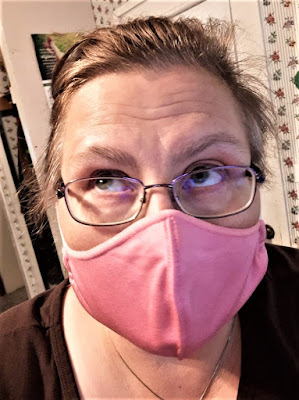 I don't talk a lot about politics on this blog, but, today, I'm going to...because...well...I don't get it!
Over the weekend I was sitting in my own house, minding my own business. In fact, we had out-of-town company in for the weekend and we were busy visiting.
I had two phone calls from two people that are totally and completely unconnected to each other in every sense of the word. I care about both of these people very much, but, neither see, nor hear, from either one of them on a regular basis and haven't at all since before the corona virus became a thing.
Anyway...two calls...one Friday evening; the other first thing Saturday morning...and both telling me that they know how I am and what they think I should do.
The first caller was much gentler in their delivery than the second, and it was done purely out of love and concern, but both called for the same reason...to see how we were doing and to tell me that they wear a mask and that they think I should wear one, too. Saturday's call was definitely much more intense.
Saturday's caller told me that they know how I am...that I'm a Republican and, that "like everyone else in this area" everything I vote for is based on abortion. Now, that right there is funny, because I don't ever remember them being in the voting booth with me one time, but that's okay.
They told me that all Republican's care about is the rich and being wealthy. They told me that my husband has become so radical that they don't even want to talk to him and they told me that (even though they've not been around me at all since this whole COVID thing has started) that I am stupid for not wearing a mask and that I should be wearing one. 😷
Now, mind you, they called me and told me all of this from the comfort of their own home where they are in QUARANTINE because they are sick and have tested positive for COVID-19. 😳
What started the whole thing on Saturday to begin with was, I had sent my friend a message to see how they were feeling, let them know that I was praying for them, and to see if there was anything that I could do to help them with while they were in quarantine. 😧
Well, in my defense, let me say this...
# 1 - While it's true that I do vote Republican more often than not, I am not a Republican. I vote for whoever I think will do the best job. I have voted Republican, Democrat, and third party. I'm pretty sure that that makes me an Independent.
# 2 - I do not know what "everyone else" in the area does, but I, personally, do not vote for anything I vote for based on abortion. I vote for everything that I vote for based on how closely it lines up with the Word of God, because, in the end, that's the only thing that's going to matter anyway...whether people think so or not...and, yes, murder is wrong according to the Bible.
# 3 - I am neither for the rich, nor wealthy, so I have no idea what that's got to do with anything.
# 4 - Yes, it's true...my husband does tend to be radical, but he's no more radical than he's always been. Somehow, when he's radical about the things that people agree with that's okay, but, when he's not...well...I guess he no longer matters. Do you really think that bothers him? I can tell you...it doesn't.
# 5 - And, as for wearing a mask (and I clearly conveyed this to both callers)...if I had a reason to wear a mask or was visiting either one of them (the two that called me to ream me for not wearing one, or anyone else that has a compromised immune system, has health issues, or lives in fear) I would gladly wear a mask for their sake.
As for myself, thus far, I have not been anywhere that has deemed it necessary to wear a mask and have not done so. Home and work...that's about it...and I'm getting very choosy about where I shop...so... So what? Who cares?
Like I told "my friend" on the phone Saturday...with abortion it's "my body, my choice"...right? (To which he replied, "Ought to be!!! Yes!!!")
Well, honey, it's a two-way street! If I can choose to have a living, growing, feeling, helpless little human being ripped from my womb against their will, I most definitely should be able to make the choice not to stick a mask on my face if I don't want to...especially when there's absolutely no need to!!!  After all, it is MY body and, therefore, it is MY choice!
What is WRONG with these people???
And, yes, I know before I even post this that it probably isn't a good idea and will probably open up a can of worms, but, you know what? I don't even care anymore. 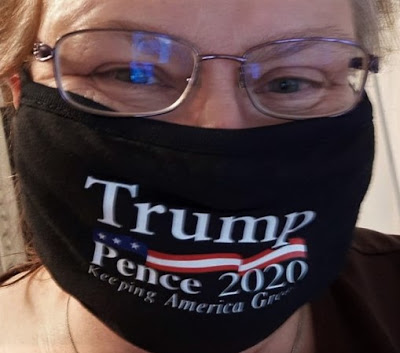 If they really want me to wear a mask, I think I'll wear this one.
Until next time...
~ Rebecca
Recent and related posts that you might enjoy reading...