Encouragement in Times of Trouble

I just posted this on Facebook earlier and, with the way that they are manipulating and pulling stuff down, I decided to repost it here on my blog for safe-keeping. Hopefully, it will be of encouragement to others out there.

Warning...it is long and rambling. 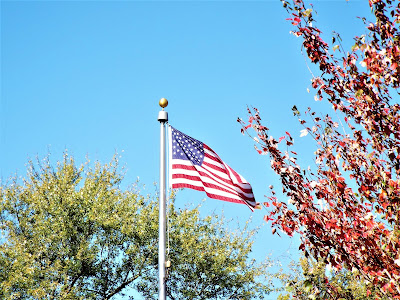 Many people have expressed sadness, depression, discouragement, and a whole host of other emotions and feelings today. To them I say...
First and foremost, as much as I love and respect the man for all he's tried to do for us as a nation, President Donald J. Trump was not, is not, never has been, nor ever will be, our Savior. Jesus Christ is and He is the same yesterday, today, and forever. Nothing is going on that has not first been filtered through God's fingers and He is still on the throne, still in control, and still wins in the end...no matter whose in office or what's going on.
Secondly, I addressed a friend earlier and, for others that might be feeling some of the same things she was, I'm going to share some of what I said to her here.
In response to part of a conversation that was taking place, I responded with...
"...God is still on the throne and is still in the mix and this isn't over! This isn't about Trump and Biden! This is a spiritual battle...a major end-time battle between good and evil of Biblical proportion! It's a major end time battle that is taking place just before the soon return of Jesus Christ! It is Matthew 24 being played out before our very eyes and we have been hand-selected by God for such a time as this! This is where we dig into the Word! We find those promises that apply and we stand on them! We pray and we stay engaged! We keep pressing forward and get busy about the Lord's work...doing whatever we can and whatever He calls us to within our own spheres of influence. We stay on top of our politicians! We pray for them, contact them regularly, and encourage them to do the right thing...and, if they don't...we vote them out next time! Stay in tune to the Word! As we wade into unchartered waters the Holy Spirit will continue to lead, guide, and direct God's people. This isn't over until God says it's over and His leading has been quite clear up until now. I'm absolutely sure that He's not going to leave us hanging. Stand strong, don't be discouraged, and don't get over into fear. God's got this and we are going to see some amazing things in the days to come!"
In addition to this, I said...
...Things aren't as bad as they want us to think. Now...shake off the battle dust, pull yourself up by the bootstraps (combat boots, that is), straighten those shoulders, get that chin up, wipe away the tears, and resign yourself to keep right on marching no matter what!"
Then I added...
(Rebecca starts singing...Onward Christian soldier...marching as to war...with the cross of Jesus...going on before..."...her voice trails off as she, herself, marches wearily on.. tattered U.S. flag in hand...over the hill and out of sight)

Born-again Believers, we are Christians first, then patriots. Our allegiance is to God first, then to our country. Both are important.
Everyone is asking...now what do we do? Do all of the above. Get off the secular media where they are only telling you what they want you to hear and tune in to Victory's AMERICA STANDS and FLASHPOINT programs. It's the only place that we're getting truthful news as it unfolds. It's incredible how much the mainstream and social media groups are leaving out, manipulating, and twisting to keep Americans blinded and in chaos and, sadly, most of them don't even realize that they're being played. What's even sadder is, that most of them don't care that they're being played or even want to know they truth. They are happy just as they are...deceived and being deceived. It breaks my heart. Pray for them. Pray that their eyes and ears would be opened to the truth before it's too late!
Lastly, I want to encourage you to get involved. As Krisanne Hall said earlier on VICTORY...the office of president isn't where the power is. It starts at the local level and that is where we need to be.
I'm going to go a step further and say this...government begins in the home...then in the church...then at the local level...city, then state, then federal. We need to be cutting this stuff off at the root!
Listen people, it's time to get your own house in order and get involved in a GOOD Bible-believing church. There are a lot of churches out there, but, sadly, most of them are not Bible-believing and, many of them that claim to be, pick and choose the verses that back their own twisted view and refuse the whole council of scripture taken in context. This is NOT how it should be!
After that, get involved in your local government...city, county, and state...and stay involved! THIS is where the power is! It starts at the bottom and works its way up! If local guys and gals aren't carrying out their duties in a way that aligns with scripture...get them out of there!!! PERIOD! And get somebody in there that will!!!
I'm just rambling now and am going to stop. The whole point of this message is...don't be discouraged...don't be depressed...don't give into fear! Get up, get going, and keep going! God is still in the mix and, through Him, victory is ours...no matter how bad things look!
Until next time,
~Rebecca
Recent and related posts that you might enjoy reading...

Email ThisBlogThis!Share to TwitterShare to FacebookShare to Pinterest
Labels: encouragement, encouragement in times of trouble