Latest Updates On My Dh

I know that some of you are awaiting updates on my dh. Here are my latest updates on Facebook... 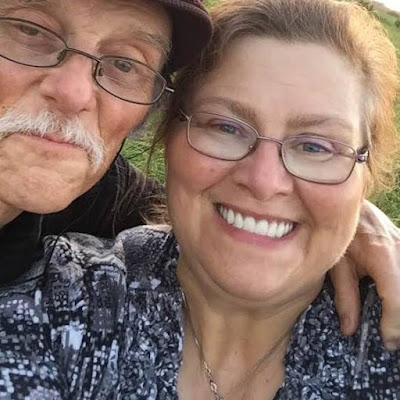 John and I
Monday's post (March 29, 2021)...
"...They did the gallbladder scan today and it was clear, so no surgery! Praise the Lord! They had planned on doing the endoscopy today, too, but, due to a conflict in scheduling, it has been put off until tomorrow. They are planning on doing it around 11:00 and, once again, we are praying for a good report.
As a result of the massive amounts of IV fluids they've pushed, John has a lot of swelling. The doctor has ordered lasix to help pull it off.
This has been a wild and incredible few days with many emotions and lots of twists and turns. But, believe it or not, the doctor said she anticipates that John will be home within 24 to 48 hours. We give all the glory to our great and mighty God who is able to do exceeding abundantly above all that we can ask or think!..."
Today's post in full (March 31, 2021)...
"It's 8:20 a.m. and all is quiet. Things have been in such a whirlwind that I didn't even get a chance to post an update on John last night, so I will do so now. Again, I hardly know where to start.
John still has a lot of swelling due to the massive amounts of fluids that have been pumped into his body over the past few days to, not only, hydrate, but to keep his bp and heart rate normal. Both were very low at times, but stabilized completely by Monday morning.
Two additional abdominal scans were done...one Monday night; the other yesterday morning...to make sure that they didn't miss anything. Nothing was found.
The endoscopy was completed yesterday morning. They looked at the stomach and pancreas. When the procedure was over, the doctor who did it came in to talk to Amber and I and brought pictures. He said that John had a couple of non-bleeding ulcers, which was no bid deal, and that there had been a teeny tiny cyst in the pancreas, which they removed. He said he sent it to pathology (results within three days), but that it was not cancerous. He said he didn't know what it was, but that it should not have been there and that none of this made sense...that the numbers and initial tests didn't match with anything they were finding. He seemed a bit perplexed, but confident that everything was good. John could go home...provided that the other doctor agreed.
The other doctor agreed. She went over the final report with us and ordered up meds to be taken at home...an iron pill, a good multi-vitamin, probiotics, something to coat the stomach before eating due to the ulcers, and a water pill to pull the rest of that water off. Next thing we knew...we were on our way home!
Amber knew of course because she was will us at the time, but we wanted to surprise the other kids. Two of the kids called to check in while we were driving, so of course, I told them what was happening; the rest of them found out upon (or shortly after) our arrival. Tears of joy and celebration!!!
What a great and mighty thing the Lord has done! We can't explain it. THE DOCTORS can't explain it!!! But it's all documented and it's all true.
Even at that, though, John's body has been through a lot and will need time to heal and recover. He's still got a lot of water on him and that's got to come off and he needs a lot of good nutrition and to stay hydrated. He's got an appointment with our primary care doctor tomorrow and a follow-up with the gastroenterologist in April.
Throughout this experience I think our family has experienced every emotion known to man from one extreme to the other and more. We've witnessed a mighty move of God and miraculous intervention on every front as He has begun a work that will carry us through these dark and troubled times. What a testimony!
It is now 11:20 and I have still not got this post out. One of the gals at the hospital just called...I forget her title, but she is the one who calls after release to go over discharge instructions, medications, and follow-up appointments. Anyway, she was all abuzz! She rejoiced in being a witness to this "modern day miracle" (her words) and spoke of the goodness of the Lord.
People, it's real! God is real! And He loves each and every one of us soooo incredibly much! If you don't know Him personally...now is your time! Put aside your fears and doubts and just reach out to Him. Ask Him to forgive your sins and make Himself real to you! He will do it! Now is your moment! Time is super short so don't delay! We love you all!"
Until next time...
~Rebecca
Recent and related posts that you might enjoy reading...

Email ThisBlogThis!Share to TwitterShare to FacebookShare to Pinterest
Labels: My Testimony