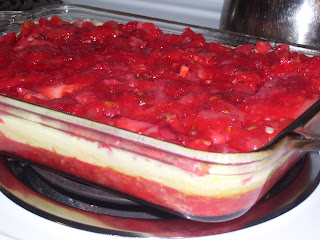 I originally intended to make a Paula Deen dessert that I had seen on Swagbucks TV the other day, but, when I started making it I tweeked and tweeked and kept tweeking until I think I ended up making more of an original dessert than not...so...here it is...

Open Jell-O and pour into bowl; add boiling water and stir until dissolved. Crush strawberries and bananas, slice pineapple chunks, and mix together with chopped pecans (I did this with my kitchen aid. Spray an oblong glass baking dish with pan spray and spoon half of the Jell-O mixture into the pan and flatten out level. Put it in the fridge to set (this only took about 20 minutes). While that's setting, mix instant pudding and yogurt, sour cream, or milk (I used plain, homemade yogurt and it worked really well or any combination of the three however you choose would work well, too). After fruit and gelatin mixture is set, spoon the pudding/yogurt mixture over that, then top with the remaining fruit and gelatin mixture. Chill until ready to serve.


This is part of the 12th edition of The Christian Home Magazine.
Posted by Rebecca Knox at 3:54 PM